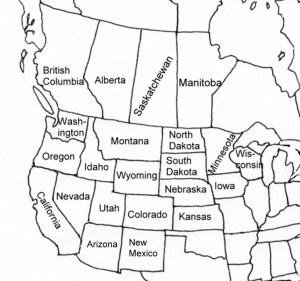 In 2017, all Windows version prices were cut in half.  Early in 2022, we began adjusting our prices to respond to higher costs, and to better meet our goals and mission.  Final adjustments were made in late September of 2022.

With appreciation for native plant societies, those who purchase our Windows versions through their state, province or local Native Plant Society or similar organization can get a 30% reduction on the price.

Plant Keys for Windows 98 computers or newer are available for each state and province named in the map above plus West Virginia.  Each key includes all the native and naturalized vascular plants known to grow in that state or province.  The list below gives the total number of species included for each state; text information regarding varieties and subspecies is included for a majority of the species.  Note: all PC versions have been updated as of May, 2020, and the Pacific Northwest version was considerably revised as of June, 2020 to coincide with the geography and plants of the recently revised Flora of the Pacific Northwest.

There is a $20 shipping charge except for West Virginia.

West Virginia, – free – with unlimited site license – $10 shipping only.   A collaboration of the West Virginia Herbarium and Flora ID.

NOTE: All Windows versions at this time will be shipped on a Flash Drive / Thumb Drive.

JUNE 15: 2022 Now Available: “Vascular Flora of West Virginia,” A WINDOWS VERSION FOR WEST VIRGINIA.   A companion to the 2006 Checklist & Atlas.  COLLABORATION WITH WEST VIRGINIA UNIVERSITY HERBARIUM and Flora ID. It is free, with $10 for shipping, and an unlimited site license.

To find our apps on Google, enter on the search bar “play.google.com > rtn > click the small magnifying glass in upper right corner of the screen > in the search bar, enter  “flora id Utah”   (or enter a different state we cover.)  Click the Flora ID rectangle to open it.

To find our apps on Amazon, use this link: amazon.com.apps by flora id    Then scroll down to find one of our apps, on the page for that app go down to a heading “Developer”, and the third line down says “more of these apps; click the line and it will bring up all our apps.

JUNE 1, 2022: We have changed our prices for Windows plant software, with lower rates when purchased through through your state or province Native Plant Society.

May 15th, 2020, All Windows versions of our keys have completed a major update.

ALL PROCEEDS FROM THE SALE OF APPS AND PC KEYS GO TO SUPPORT BOTANICAL EDUCATION, RESEARCH, AND DEVELOPMENT OF IDENTIFICATION TOOLS.   DONATIONS ARE  TAX DEDUCTIBLE.